What is it about creativity that manifests itself so powerfully in the human brain? I love it when I find creativity in an unlikely place; its recognition serves as a sort of beacon, a surprise gift in the middle of an otherwise hectic and mundane day. One pauses for a moment in astonishment and delight. Ah! Clever, funny, moving, lovely!

Artists, musicians, actors, dancers….we expect them to be creative. But sometimes creativity shows up when you least expect it. A person whose daily job as an office functionary does not hold much promise for creativity becomes a maestro in the kitchen, working instinctively with food in a relaxed and inspired manner, and making utterly luscious meals. A woman working in the financial industry, daily tasked with mind-numbing paperwork to dubious purpose, turns out to be the most gifted of gardeners, creating beauty in a prosaic backyard lot; another toiling away in a hedge fund office is able to sing and dance, Bollywood-style, like a dream.

Case in point: my optician. He is superb at his job, and in fact his is the family business, a traditional optician’s shop with rows and rows of eyeglasses lining the walls. In the window of his storefront location, though, there is a phenomenon: small, charming vignettes that he stages, sometimes surreal, sometimes poignant, always intriguing. Featuring small creatures, puppets, artifacts and mixed media, these scenes offer human messages within oddly arranged objets. Like all real art, the more one looks at them, the more questions arise and the more one understands. Here a little creature reaches out to help another in a slapstick-worthy predicament. There the creatures lean forward, conspiring? Or perhaps learning something new together? Sometimes the scenarios are not message-based at all, but are artfully composed juxtapositions of calm and chaos. Optician by day, sculptor/creator by night, this man has unsquelchable creativity.

These thoughts were crystallized this week with the death of the radio host Steve Post. How many years did I listen to his voice, announcing music but waiting always for his acerbic, smart-ass comments on nuclear plants, the Nixon White House, and the preposterous and untrustworthy status quo. No one opened the mind more quickly or with greater accuracy than he, and to follow along during his pledge drives was one great hilarious roller coaster ride. Mr. Post – for so I thought of him – was brave and sassy and utterly unwilling to buckle under the demands of polite society, bosses or the FCC, which may ultimately explain why he was sidelined under new management. Steve Post embodied anarchy in great 1960s style, and there was no one who used language on the radio with such devastating wit. His creativity manifested in a deep belief in chaos, and he boldly used it in every word, choice and action. It was a profoundly committed life, from which I drew inspiration and cheer.

Chaos and creativity feed each other and are conjoined. Aren’t we lucky that there are people who are willing to walk that line of danger and risk and in so doing, create exquisite, disturbing, puzzling and life-enhancing experiences for us? 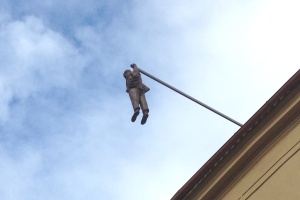