In classical Japanese painting there is a style of picture called “Whose Sleeves” (Tagasode), in which the painter depicts a number of kimono or other garments casually draped over a rack. The name derives from a 10th century poem, often translated as:

The fragrance seems even more alluring than the hue,

Whose sleeves have brushed past?

Or would it be this plum tree blossoming here at home?

The poem is sensual and hints at the wearer of a beautiful kimono and her scent as she passes by. We the viewers of Tagasode screens are left to imagine about the wearers of the garments that we see. Some are folded neatly and others are tossed over the rack, as if in the heat of passion. Some are simple and some are extravagant and opulent. We wonder about these people – are they rich and powerful? Is someone visiting? Are they lovers? The display of the private possessions – something as personal as a garment worn next to the skin – is meant to lure us into speculation about their owners.

A common adage in the west is “clothes make the man.” You can find it in Shakespeare (Polonius to Laertes, in Hamlet, “…the apparel oft proclaims the man”), but nineteenth century writers, Twain, Melville, Shaw, Thoreau have also weighed in on the topic. I suspect that one could go back to earliest times and find similar ideas. In the formal culture of Edo Japan, a feudal society, the status of an individual and his family was maintained in part by what was worn in public. What is compelling about Tagasode screens is the glimpse it gives us into the inner lives of private people.

It may seem a leap to say that I recently saw the two-part Royal Shakespeare Company production of “Wolf Hall” on Broadway, based on Hilary Mantel’s brilliant novels – but it is not. In the world of Henry VIII’s court, as in 16th century Japan, class and status were at the forefront of political power. Success, failure, and indeed, life and death, were mostly determined by which side of the power divide one found oneself, and the primary determinant would have been how highly or lowly one was born. And how was this expressed? Nearness to the king, of course, but on a day to day basis, also by how one dressed and presented oneself – through clothing and accessories. In the story of “Wolf Hall”, three primary characters in this history, Cardinal Wolsey, Thomas Cromwell and Anne Boleyn herself, are seen to defy the conventions of place and birth, rise to high positions unlikely given their backgrounds, and then fall spectacularly when their tentative hold on power is trumped by the established authority residing in the nobility and the crown.

Christopher Oram, the costumer of the RSC production, captures beautifully in his designs the rise and fall of the characters, and also the intense and public nature of court life. Anne, a gentleman’s daughter educated in the court of France, was not of lowly status but also definitely not of royal blood. Yet in this play it was clear from her clothing that she is consciously playing a part – a woman determined to be queen, a masquerade that she bravely continues even as she walks to the scaffold. Wolsey rose to power in one of the few legitimate avenues open to a person of low birth – the church – and as such was clothed in the sumptuous robes of a cardinal. In Mantel’s telling, the noblemen surrounding the King never allow him to forget his low birth, and although he clings to his red robe, his circumstances diminish around him as he loses the King’s favor until he is left with quite nothing, save the clothes on his back. When we first meet Cromwell, he is dressed indifferently, carefully really, so as to not draw attention to himself. Later on mention is made of his grey velvet, and having been a cloth merchant he knows quality, but again, he is cautious, wearing modest colors and styles. It is only when he has gained enough power to strike at Anne that we see him in a long aristocratic robe, deeper in color and more opulent in nature.

The sensual “Whose Sleeves” in the Japanese Tagasode is transformed in the Tudor England of Mantel’s novel and the RSC adaptation into a terrifying costume parade.  One misjudgment in self-presentation can attract attention from a dangerous foe, too bright a color draw the eye of a monstrously selfish monarch, too cocky a display the murderous envy of the less talented but nobler situated. In each instance we gaze in fascination at those clothes – who were these people? 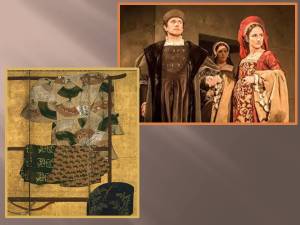