The figures of Romeo and Juliet are so iconic in western culture, and the notion of Shakespeare’s “star-cross’d” lovers so pervasive, that many manifestations of their story seem very familiar, even clichéd. Their tale has been told and retold over centuries in opera, theatre, films, musicals, the visual arts and perhaps most frequently, ballet. Right now in New York, there are two different versions in repertoire set to the Prokofiev score, at two different companies: Peter Martin’s 2007 Romeo+Juliet at New York City Ballet, and Sir Kenneth MacMillan’s 1965 version at American Ballet Theatre.

The productions are quite different. Martins’ is abstracted, two acts instead of three, very dancerly, and to my mind less dramatic. With the exception of Lord Capulet’s shocking slap of his daughter’s face, the production seems to avoid strong emotion and skitter around the edge of the tragedy. There is some interesting dancing but the story is secondary, an exception being the poignant moment when Juliet awakens in the tomb, painfully beautiful.

The MacMillan version, at American Ballet Theatre, is inherently dramatic, and from the dance perspective has some tiresomely repetitious sections, especially amongst the populace in the Town Square. However, his choreography of the primary story captures so well the arc of Shakespeare that there are moments when you would swear you are hearing the dialogue. After their night together, Romeo’s desire to leave and Juliet’s to keep him with her echoes exactly the argument about the birdsong in the text:

The tug between their passion, fear, need and impetuousness and the unmistakable danger and urgency of the moment is perfectly reflected in with the choreography.

Shortly thereafter, we’re allowed to see Juliet make the decision to go to Friar Laurence for help. In the ABT production, after her parents have threatened her and left the room, she dances and prays in despair, and then sits on the end of her bed, utterly still. Around her Prokofiev’s score swirls in powerful dissonance, and she sits on, staring straight ahead, without motion. The great dancing actress Alessandra Ferri was always especially fine at this moment. With her body stopped in time, across her face we see the gamut of emotions, terror, dread, hope, longing, wonder, and determination as the decision to act slowly dawns. In Shakespeare’s play it is clear throughout that Juliet is the more mature, but in MacMillan’s ballet he gives us the exact moment, crystal clear, that she takes the drama of her life into her own hands. It is done without steps, only with music, face, and a physically occupied space on a bed. It is dance drama at its most compelling.

In the final scene, MacMillan has created a pas de deux with the extremity and sorrow of a Greek tragedy, between a living Romeo and a seemingly dead Juliet. We know she is not dead but Romeo does not. As he drags her around the stage like a rag doll, flopping her here and there, lifting her, echoing the same gorgeous steps that embodied their passion in the balcony scene, it is difficult not to weep. The strength of this dance makes Juliet’s awakening in a tomb, with her dead lover at her feet, all the more potent, sweet, and terribly sad.

I have written about Shakespeare and ballet before, about the difficulty of transferring and reinterpreting a medium based on poetic language, into one of pure movement. In the balcony scene, Juliet says

The more I have, for both are infinite.

The infinite mobius of love expressed in this language is beautifully captured by MacMillan. To see again and again his ballet of this story is to find new aspects and subtleties each time, and to love and understand them, and Shakespeare, better. 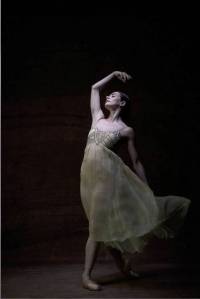