The great house Chatsworth, in Derbyshire, U.K., is the ancestral country home of the Cavendish family – the Dukes of Devonshire. From its early days it has been open to the public, the better to share, or show off, the extraordinary power and wealth of the family. Historically, any shopkeeper or tradesman could stop by with his family to be shown the opulent public rooms, marvel at the art works and tapestries, and feel the requisite awe that the surroundings were meant to inspire. The family lives there still – the house is so large that swathes of private rooms are separate and invisible to the many thousands of tourists who visit annually.

Chatsworth is big business now, a commercial hub of income-producing ventures: tens of thousands of acres of lands, shops, restaurants, catering enterprises, hotels, rental cottages, branded foods and so on. It can be argued that the estate’s survival depended on the family’s willingness to grapple with making money, since punitive changes in UK tax laws in the 20th century made many a family lose these large homes to pay death duties. Some properties managed by the National Trust, inheritor of those lost houses, are seedy and down at heels due to insufficient funds for upkeep. Not true at Chatsworth, which shines like a new penny. It is, I suppose, a trade off.

The house is filled with riches, it’s true, but to my eyes the star of the property is the stunning, gorgeous gardens, and especially the park, designed by 18th century landscape architect Lancelot “Capability” Brown. Now here is a treasure! The rolling green hills, spotted with sheep and cows and adorned with large, carefully placed specimen trees, evoke a sense of forever in the view.  It was Brown’s goal was to create a “natural” landscape, different from the baroque, formal gardens that were then popular. He succeeded. Emerging from a house so crammed with pictures and antiques and collections and statuary and furniture and carving and gilding that one begins to feel inundated, the fresh, open landscape is a tonic. The crowds seem to disappear over the hundreds of acres, and you can clearly hear the bleating of the sheep, the birds, the splashing fountains and the wind.

Brown was followed at Chatsworth in the 19th century by a fantastic Kew-trained garden designer named Joseph Paxton, who added an enormous rockery, fountains, dells and groves of trees. There is a history of gardens here, lucky for us, as some of the best of each era remains, from the early cascade fountain and original greenhouse, to Brown’s lawns, to Paxton’s rocks and 150-year old camellias. And it continues – a Chatsworth-inspired rock and trout stream garden won the Best Show Garden gold medal at this year’s Chelsea Flower Show.

We can be grateful to this family, then, not for its privilege or power or wealth, nor for amassing huge collections of precious objects at Chatsworth, but for supporting and preserving the more ephemeral work of Brown and Paxton and a legion of other gardeners, who shaped and nurtured the oasis that is its park and gardens. Art can heighten, inspire, impress and stimulate, but in the end, it is the misty air and greeny hills, and the sweet faces of the sheep, that create a heaven. 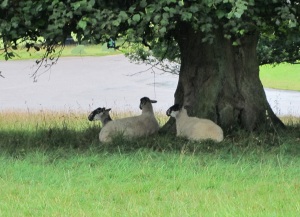