In his 1693 treatise A Short View of Tragedy, the English critic Thomas Rymer famously distilled a lesson from Shakespeare’s Othello, thus: “This may be a warning to all good Wives, that they look well to their Linnen.” In they eyes of Rymer, Desdemona, the innocent victim of Othello’s jealousy and Iago’s manipulation, brings about her own destruction, honor-killing style, by losing track of the famous handkerchief and making plausible the false accusations of adultery. The playwright Paula Vogel turned this idea on its head in her 1993 play, Desdemona, A Play about a Handkerchief, in which the tale is told from the point of view of the three decidedly guilty women in the story, but the ending – implied – is the same…death by husband.

Desdemona is always troubling, not least because she seems to accept her fate so willingly. Does she think her intense love for Othello will enable her to win back his favor? Why doesn’t she run away? Why doesn’t she fight? [In the fun but often misconstrued 2004 film Stage Beauty, a fictional actress, the first woman being allowed to play Desdemona, declares, “A real woman would fight!”] Did Shakespeare intend Desdemona to be a real woman? Or are we to see her as a symbol of some sort of otherwordly wifely virtue? In the play her last moments sad and frightening; in the opera version Otello, Verdi and Boito made them even more. The exquisite willow song and Ave Maria are so haunting that one feels Desdemona is halfway to heaven already.

What is most bothersome is not Desdemona’s seeming passivity but Othello/Otello’s entitlement. Focus has always been placed on the racial issues of the play, and the title character’s outsider status. His foreign birth and skin color are highlighted more by Shakespeare than by Boito and Verdi, but it is clear he is “other,” a stranger in the midst of the white Venetians, a warrior among civilians, a lion among sheep, or perhaps vultures. He has won away their lovely daughter, to their mystification, and their horror. Many characters cannot get past that point, despite Othello’s status as a war hero.

It is misogyny, though, and not racism or jealousy, that brings down the Moor, for in killing what he loves he kills himself, and the real suicide comes almost as an afterthought. What if Desdemona were guilty of adultery? The poignancy of her fate is that we know she is not, but what if she were? Does that then make Othello entitled to kill her? To kill her? If the roles were reversed, there would not be a play, or an opera – the situation would be dismissed with a shrug. The social construct in which women/wives/girlfriends are property, to be smashed and discarded at will, means Othello lives a half-life, unable to trust in the very person who brings the deepest value to his world. It is Iago’s masterstroke that he understands this weakness so well.

“Linen” was used in Shakespeare and Rymer’s time to mean household goods, personal items, clothing. It is an intimate word, implying the domestic closeness of living with and loving another person – the sheets on the bed, the shirt on the back, the handkerchief that soothes the brow. Looking to it, not as Rymer suggests, as a way for good wives to avoid trouble, implies rather the mutual task of upholding a private and precious mutual life. There may not have been a play, but how much better for Othello if he and Desdemona had looked for that handkerchief together. 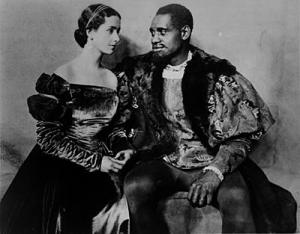