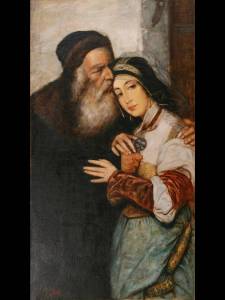 Whenever an opportunity arises to see Shakespeare’s Merchant of Venice, I leap at it knowing that I will probably find something objectionable, disappointing, disturbing or unpleasant. This is not because there are not some great – truly great – performances of the iconic roles of Shylock and Portia, but because the play is inherently difficult, tangly…one might say flawed, except that it perfectly captures the uneven landscape of human hatred and love. I always find the conventional “happy” ending – three married couples – uncomfortable, tacked onto a searing experience of prejudice, mistrust and violence. Every interpretation of this so-called problem play is forced to confront the ugliest of human conditions, race hatred, misogyny, parental rage, filial rebellion, legal injustice and societal poison. Mr. Shakespeare had us down, in spades.

For the play to work with a modern audience – if it can – two things are needed: a masterful actor to bring out the humanity and ambiguity in the character of Shylock, and an equally brilliant performer to inhabit the intelligent, landlocked and expectant Portia. Neither character is a paragon. Shylock is deeply wronged but also deeply angry – who can blame him? In every production I find Shylock’s rage justified, but always wonder, in the trial scene when the knife is poised over Antonio’s breast, if his pound of flesh will in any way improve Shylock’s life. Shylock is so profoundly traumatized by the toxic anti-Semitism with which he must live that he cannot see that his demand for justice will likely backfire. It does not matter – he can only cling to his revenge.

Portia, although often played as a wise, noble and beautiful lady, is also flawed. Bound by her father’s will and unable to choose her husband, Portia cannot trust Bassanio’s motives or her own feelings. She tests him with an underhanded trick and sets him up to fail, proving both his weakness of character and her own suspicious nature. She dazzles everyone with her seeming understanding of the law, disguised as a man in the trial scene, rescues Antonio and turns the judicial process on Shylock. But do we care about her? For that we need recognition. Portia’s life is an inherent dichotomy, an intelligent and educated woman forced to live within disadvantageous marital conventions and societal expectations. In this she and Shylock are more alike than not, and her awareness of this is what makes the character of Portia compelling.

I have seen one truly great Shylock and one great Portia in my time – both at the National Theatre in London, in a production directed by Trevor Nunn in 1999. Henry Goodman played Shylock’s extremes of emotions with complete believability – the piercing loss of his daughter – a daughter he has previously slapped hard in the face – cloaked the famous speech “Hath not a Jew eyes” in ragged and unbearable pain. Mr. Goodman’s wounded portrayal made it possible to understand and sympathize, even when his actions were spiteful. The wonderful Irish actress Derbhle Crotty played Portia as hauntingly aware of the imperfections of the man she must marry. In the trial scene we see her frantically paging through law books, no certain lawyer she, trying to improvise something to turn the course of the trial. When she does, she is relieved but also anguished by the price to be paid. Never has the ending of this play seemed more uneasy – domestic bliss purchased at a caustic cost conveying such sour irony that one sensed it would haunt these couples again and again.

There is a new production of Merchant playing in New York at the moment, on tour from the Globe Theatre in London. It features a magnificent Jonathan Pryce as Shylock, playing him as warm, intelligent, dignified, proud….almost patrician in his bearings and markedly different from the Christian lowlifes and hucksters with whom he deals. Alas, he is supported by a crew of mostly young actors who are virtually interchangeable, and despite Jonathan Munby’s direction, we can care little for any of these merchants or their friends, who seemed plopped into Venice from a modern frat house. The Portia of Rachel Pickup did not uncover the conflicted depths of the character, but rather made her jolly and  upbeat, a relatively shallow woman who – I thought – might just deserve the husband she acquired. The world of the play was not universally believable, and only Mr. Pryce and Dorothea Myer-Bennet as Nerissa convinced me that we were in 16th century Venice.

Nevertheless, any attempt to grapple with this play is worthy. I was left with the tone of Mr. Pryce’s voice when he said the line “I had it of Leah when I was a bachelor.” In the midst of an enraged rant on his daughter and the merchant, we heard in the sorrowful and inward delivery of that line the history of a marriage and deepest loss. I marvel again at Shakespeare’s ability to find kernels of truth in the bitterest situations, and laud Mr. Pryce  for bringing it to life.