We have a new subway line in New York, the “Q”, which runs up the East Side of Manhattan and finally provides relief from the perpetually overcrowded 4-5-6 line, 3 blocks to the west. For those of us who live in the neighborhood, it is fast and clean and just reward, after nearly ten years of intense construction, drilling, road closures, noise, dirt and annoyance.

The New York subway system takes a lot of flak because New Yorkers like to complain. But it is one of our glories, a semi-efficient behemoth that makes it possible for 8.4 million people to peaceably coexist in limited space, travel to work and play in reasonable times, and keep just that many million cars off the streets. If you’ve ridden the Underground in London you know that our signage is not very good; if you’ve ridden the Rapid Transit in Singapore you know that our stations are often dark and cramped; if you’ve ridden in any of the subway systems in Japan, you know that ours is noisy and old and low-tech. But it works, and a new line is to be celebrated.

Artists have decorated the new stations with mosaics of everyday folks, children and construction workers, policeman and students, businessmen and prominent artists, a panoply of humanity, all using the subway. Each time I ride the train I see something new, most recently a sign above the escalator at the 72nd Street stop with the motto of America’s Great Seal, E Pluribus Unum. How apt! Is there any better way to describe the population of New York City’s subway riders?

E Pluribus Unum, from many, one. I notice that it doesn’t say, from many white, one, or from many Christian, one, or from many male, one, or from many straight, one. It says FROM MANY, one. The original meaning of the phrase may have meant, from many states, one union; but the meaning has changed as our country has grown and matured, and now this phrase stands out in its brevity and wisdom. Our strength is in our many, our power and health in our diversity. Any attempt to undermine the Pluribus will weaken the Unum. The lady in the harbor welcomes, and it is up to us to celebrate the many, for, or course, they are us. 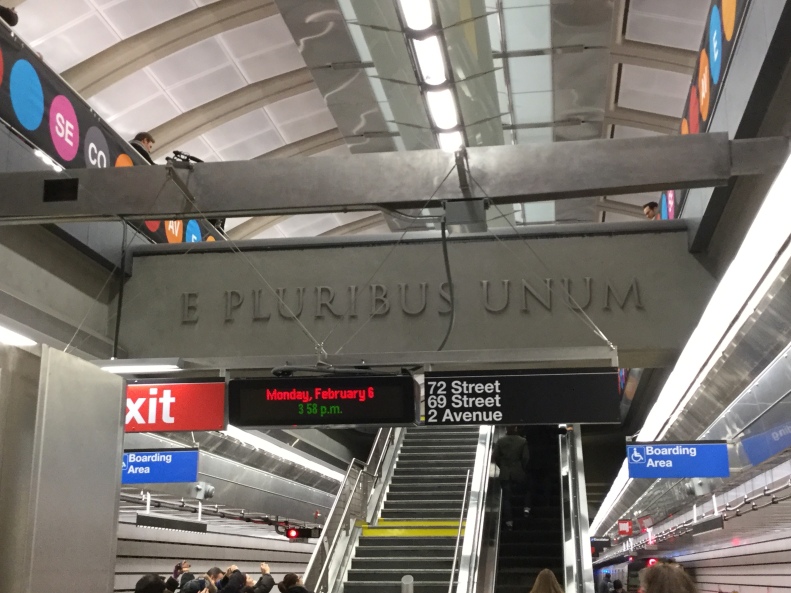