What is it about stories that demand retelling? We are human, we like stories. We tell them to each other, to our children, to ourselves, and reiterate our legends and warnings and promises. Some story lines recur and are recognizable across cultures and ages – star-crossed lovers, overreaching heros, those favored and punished by deities and fate – they remind us of life’s boundaries, these characters, and we know them. They recur in oral tales and literature, in music, in art; we recognize them and it is very satisfying.

Some of our stories are also history, about real people who did something wonderful, or terrible, who loved wrongly or endured greatly – we like these stories too. The horizons of human endeavor compel us to tell and retell, and wonder what it was that made those people so foolish, or so brave, so fearful, so brilliant. Joan of Arc – what young girl has not encountered this tale and wondered in her teenage self what made Joan courageous or mad, confident, reckless? Scott and Amundsen and Shackleton, the polar explorers, how can we understand what drove them into icy extremes towards death or glory? There is light and dark, scandalous love and notorious crime, outlandish behavior and sacrifice – we hear these stories over and over and gaze in wonder. Do we capture them, our predecessors? Perhaps not – perhaps there is always something unimaginable that keeps them just at a distance, and that’s why we return again and again, trying to understand.

One true story often retold is that of the Russian ballet impresario Diaghilev and his lover and star, the elusive Russian ballet dancer Nijinsky. Paris in the early 20th century was a time of artistic ferment: Picasso and Matisse were painting, Stravinsky and Debussy composing, Cocteau writing plays and libretti, Bakst and Chanel designing, among many others. Diaghilev was at the center of the wheel. A provincial Russian who re-invented himself as cultural maven, he was able to corral mountains of talent for his Ballets Russes company. He provided a platform for the work of Nijinsky, often referred to as the greatest ballet dancer of the 20th century. There is no film of him dancing, although a few spurious clips appeared on You Tube in recent years. They are now known to be recreations from still photographs by a French artist named Comte; we can never see for ourselves the reported miracle of his dancing. Add to that the then-illicit relationship, Diaghilev powerful and infatuated, Nijinsky gifted and unstable – in the end mentally ill and institutionalized – their story is ripe for retelling…what drew them together? Did they truly love, or only use each other, or both? How great, really, was their art? 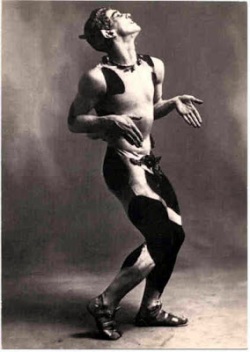 The answer has been sought in many media over many decades. There are dozens of ballets, plays, paintings, poems, sculptures, musical compositions and films attempting to capture these fascinating men and their lives. Some very great talents have been involved, but they do not satisfy – the enigma remains. Most recently playwright Terrence McNally, an important voice for the gay community, ventured into this territory with Fire and Air, produced at the Classic Stage Company in New York. His play outlines the circumstances and relationship, and applies his typical warmth and humor, but in the end it fails to capture the miracle that made Nijinsky compelling and Diaghilev important. Casting is a problem, for who can really capture both the physical exactitude of one of the greatest of male ballet dancers, along with the chiaroscuro of his personality, or the gravitas and size of Diaghilev’s persona, his power of persuasion, his vision, along with childish eccentricities and weaknesses? We catch glimpses, but it is not enough, and we are left with an obsessive middle aged man and a petulant boy, still an intriguing puzzle.

A graduate school colleague of mine recently asked for a moratorium on this story, since every rendition – even when the inventors and participants are great artists – is found wanting. But that is the nature of a mystery, isn’t it – we look again and again and try to solve it, hoping always for a comprehension just out of reach. Did Shakespeare really write the magnificent plays that bear his name? How is it that Mozart left us extraordinarily beautiful music, yet died broken and unappreciated? What happened to Vincent, that his canvases still make us wonder and weep? We reach for a greatness that we cannot understand, hoping always to touch for a moment the nature of genius.