I visited the revival of Tony Kushner’s huge and important Angels in America last month, currently running on Broadway, a strenuous 8-hour commitment requiring Wagnerian stamina. But unlike Wagner’s massive operas, Angels resonates into my personal history, for I was a participant in the 1980s AIDS epidemic, its political ramifications and its sequelae, evil and angelic.

I lived in San Francisco during the 1980s, an epicenter of this crisis. Very occupied with graduate school, at first I was only aware of local newspaper headlines. Then my landlord got sick. My neighbor got sick. Two guys I sang with got sick. I met a nurse who worked at San Francisco General, brave and overwhelmed with her work on the AIDS ward. I myself worked at UCSF Medical Center for a time, transcribing dictations for the Gastroenterology Department, hearing the epidemic discussed every day. A friend in the Gay Men’s Chorus told me they were no longer singing at memorials, because there were just too many. It was everywhere, all around us, but we – a city that prided itself on inclusion and caring – were doing something, trying, helping, dealing with this deluge of illness and fear as best we could. I decided to train as a “buddy,” to give my time if nothing else. Then I got a job in another state and had to leave before completing my training. In this new state I discovered an entirely different world, in which AIDS was akin to the a medieval plague or biblical leprosy, stigmatized, spurned and feared. There was nothing to help HIV sufferers. Nothing.

I telephoned a not-too-distant Gay and Lesbian hot line to ask how I could volunteer. I found out that there was no program, no clinic, no ward, no specialists, no social workers, no counselors, only a small ad hoc group of friends who were trying to help. I plunged in, was assigned a man who was ill, and started helping him with appointments, getting him information, visiting when he was hospitalized, bringing him chocolate and magazines, and listening, a lot of listening. I realized pretty quickly I was in way over my head. There was domestic abuse in his life (his partner, who was deeply enraged); he was not out to his deeply religious family, and he was afraid they were going to find out he was sick; he was missing a lot of work and scared he would be fired if his co-workers or boss found out; he lived in a small apartment building and was fearful of behind evicted – he did not want me or any health care workers to come to his home; his local GP advised him to find a specialist and asked him to continue his care elsewhere, the receptionist explaining that he would scare the other patients; and on and on. The amount of help this man needed, legal, psychological and social, spiritual and medical were nowhere to be seen and could not be met by me. He was utterly terrified, not only that he was going to die, but that he would do so homeless, abandoned and alone. His desperation was palpable and devastatingly sad.

In another year I moved again for my work, this time to New York where I volunteered for a while at God’s Love We Deliver, a genius organization. Slowly ways were being found to help AIDS sufferers, with varying and mixed results. Slowly the science evolved, and who could have imagined that within a couple of decades the disease would change to something manageable. That same year I joined the national march on Washington, walking with defiance past a White House that was morally absent, blind and uncaring.

Young gay men, needle users and others at risk for HIV today do not seem to understand the oppression and terror and loneliness of those terrible epidemic years. But Tony Kushner is here to remind us.  Is it a perfect play? No. Mr. Kushner likes to philosophize and there is a good deal of intellectual wallowing. But he gets it, the lying and the ignorance and the love and the sorrow and the fear, it’s all there. And that scary, magnificent angel is still there, beating its wings and reminding us that disaster and salvation hover in middle air, and no one is exempt from compassion, from involvement or from being present in a human crisis, for no one knows who’s shoulder will next be touched.  There is ignorance abroad in the land again, and Mr. Kushner’s ferocious angel is needed now more than ever. 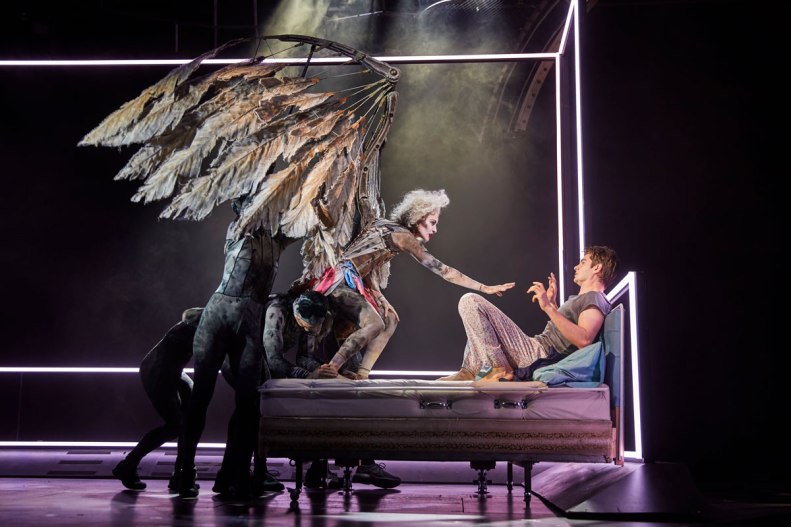