We are in the silly season of Presidential elective politics again, in which I am in equal parts exasperated and alarmed at the bad behavior, finger pointing, adolescent posturing and unrelenting b.s. that plasters the airwaves. But which holds the deeper psychological sway – what is said, or how it is said? Does vocal style and accent dominate content? I’ve heard that Bernie Sanders cannot win a general election because he is “too New York.” That might be anti-Semitic code, but it isn’t only his liberal ideas that create a New York perception, but his pronounced Brooklyn accent. Beloved in movie gangsters, it brands a contemporary presidential candidate as “other,” representing an urban East Coast existence – the so called “New York values” so reviled by certain candidates. Personal language style deteriorates by the minute: Trump badgers, Cruz preaches, Rubio accuses. The columnist Maureen Dowd recently addressed in a spectacularly funny fashion just how much we owe to Sarah Palin’s gobbledygook, sheer comic book rhetoric that would be difficult to invent. http://www.nytimes.com/2016/01/24/opinion/sunday/sarah-palin-saves-feminism.html?_r=0

How do we expect our leaders to sound? Listen to recordings of Franklin D. Roosevelt, calming a frightened people with his fireside chats on the radio during the Great Depression, or declaring war on Japan after Pearl Harbor. Roosevelt was also a New Yorker, not a Brooklynite but from an old patrician family. He spoke in the clipped English of early 20th century educated New England, which sounds as different from us today as do the folks on Downton Abbey. And yet this is the voice that Americans trusted, and this is the accent they believed. If you asked most Americans during Roosevelt’s presidency if he sounded like them, they would have acknowledged that he did not. The Great Depression was a desperate time. They believed Roosevelt’s education and background provided the leadership qualities that were so needed. They didn’t expect him to sound like them; they needed him to be different.

Roosevelt as he was would never be elected now, not because of his polio-damaged legs, but because his speech would condemn him as “elite.” Such a person would not be considered to represent the average Joe, or understand and fight for his needs. When did this change take place? Truman and Eisenhower both sounded very Midwestern, very neutral. Kennedy was pure New England, but harder edged and less aristocratic than Roosevelt. Then came Lyndon Johnson, a Texan with a broad drawl, unafraid to use in public language that would have been completely unacceptable just a few decades earlier. He stepped into the presidency in a moment of national crisis, and thereafter wrought a change in the perception of the office. Regional distinctions became more pronounced in the campaigns that followed, with greater class divides, vast silos of difference between “us” and “them,” the definition of which depended not on education or experience or heaven forbid, wisdom, but on geographical location, economic background and religious affiliation.

I admire the power of rhetoric. Obama at his best mesmerized, with his clear-eyed and eloquent promise of hope. Hilary, who represents to many of us our personal fight for a place at the table, is frequently derided as “shrill,” a comment which carries with it the decaying smell of misogyny. Yet, as someone I respect recently said, is there anything about the world that she doesn’t know? Her speech projects confidence and knowledge. Trump, with his barky, mean attacks on anyone or anything he happens not to like, make some people cheer as if they were at a boxing match (and it helps that his New York birthplace is not very audible in his speech).

Last week someone told me that she really liked Trump. Why? I asked. Because he doesn’t have to take anyone’s sh**, she said. Has it come to this? A mouthy man, wealthy enough to seem untouchable by government agencies, terrorists, grabby bosses, banks, landlords (even though he himself might be one,) is able to convince the average person to elect him president? Not president of a golf club, president of the country? Has our understanding of the office and our role in the world deteriorated to this point, that we would trust such a person to negotiate with the world’s bullies, lead the free world with dignity and honor, while all the while his hand hovers near the little red button? What would Roosevelt make of such a person? And when did we lose our ability to detect b.s. when we hear it? 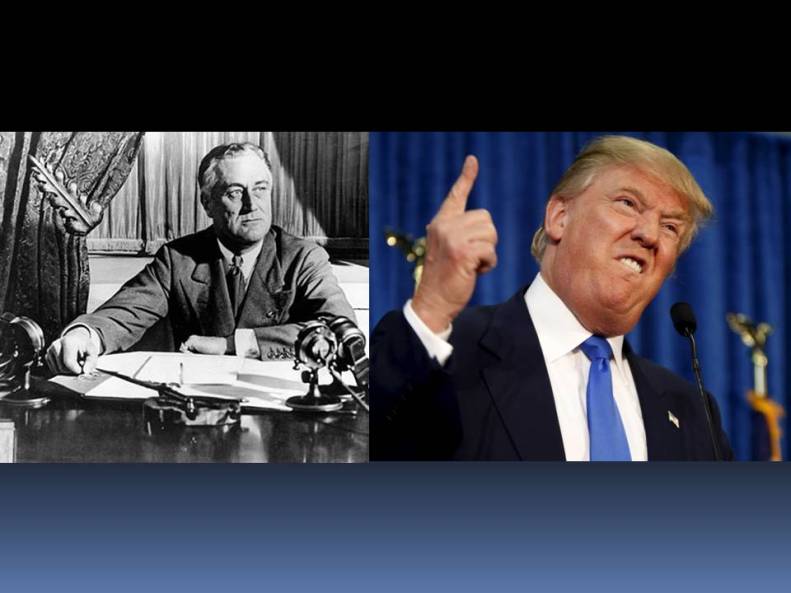